Staff Board of Directors Advisors and Liaisons
Staff

Katie received her BA in English from American University in Washington, DC.  She joins Diaper Train with over 15 years of experience working in with non-profits, and fundraising as well as in higher education, and state government. She also spent many years as a volunteer with the Wake County Public Schools, Christ Episcopal Church, Wake Relief, and the American Cancer Society. Most recently, Katie worked on the consulting side of major gifts with longtime fundraising consultants, Gail Perry and Kathryn Gamble. Katie comes to Diaper Train at a pivotal moment for the organization as it embarks on its second decade of continued growth and serving the needs of all the residents of Wake County. 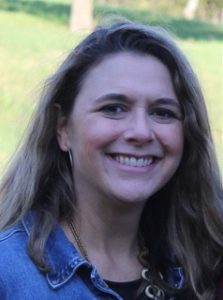 With over 25  years experience working with non-profits, Ana joins Saint Saviour's Center as our Program Coordinator, responsible for the Diaper Train and Senior Healthy Living programs.

Ana brings a tremendous amount of experience in event planning, annual campaigns, and volunteer management having worked for Saint Timothy's School, creating and currently serving on the board for the Sanderson High School Foundation, and spending ten summers as Camper Services Director for the YMCA of the Triangle's Camp Sea Gull.

Ana, her husband Henry, daughter Loring, and son Ward have lived in Raleigh for over ten years and are active members of the Church of the Nativity. She is a NC State graduate who loves to cheer on her Wolfpack any chance she gets! Last but not least, she has two dogs, a labradoodle named Zephyr and a soft-coated wheaten terrier puppy named Teddy.

Cece Scott, Immediate Past Board President and Strategic Advisor